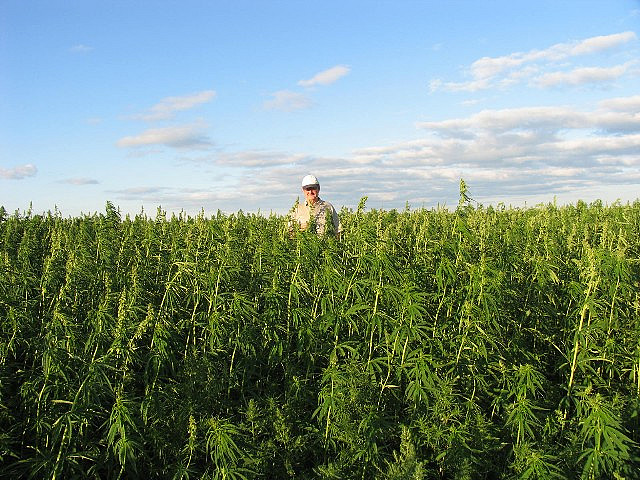 Prospective hemp farmers are expecting a go-ahead soon from the federal government, which would allow pilot hemp-growing programs to be established in the 10 states around the country where its been legalized. Hemp is the sober strain of cannabis (containing less than 1% THC), and even though it has huge potential for becoming an industrial cash crop, it was unfortunately banned by the U.S. government alongside its cousin strain, marijuana, in 1937. Many things have changed since then, and in the recent years’ shift in attitude toward marijuana, the illegality of hemp in turn has finally earned the political recognition it deserves.

Lawmakers who support a legal hemp market saw an opening with marijuana’s popularity on the upswing, and they’ve been able to add a provision onto the Farm Bill that will allow universities and state agencies to grow and begin researching the long-awaited plant. “This is big,” according to Eric Steenstra, the president of Vote Hemp – a group that advocates for industrial hemp. Some believe that this federal relaxation may lead to even more drastic changes in the near future. “This is part of an overall look at cannabis policy, no doubt,” Steenstra said. Regardless, the bill has already passed in the House and Senate, and president Obama is expected to sign it into law soon.

The industrial hemp industry is currently dominated by Chinese agriculture, but American prospective hemp farmers are eager to get in on the market. Predicted uses for industrial hemp are numerous, and undoubtedly more will surface as further research begins, but perhaps the five most politically-resonating reasons for growing hemp are these:

1) The use of hemp paper and cardboard products can help prevent deforestation by lifting some weight off our trees’ shoulders.
2) Hemp clothing and other fabrics offer an environmentally-friendly alternative to cotton, a water-guzzling crop.
3) Plastic and building materials made from hemp can be manufactured to be 100% recyclable and/or biodegradable.
4) Hemp can produce easy, clean energy via biodiesel and ethanol fuel.
5) Hemp seeds are known to be one of the most nutritious seeds on the planet: they are a healthy source of vitamins, minerals, and protein.

Some hemp opponents have expressed concerns that production might cause localized strife or confusion for law enforcement, as the hemp plant obviously resembles marijuana, its intoxicating cousin. However, the differences are easily-spotted and are (we can only hope) relatively common knowledge among law enforcement officials. Marijuana has large, bud-tipped tops brimming with THC, while hemp stalks are significantly more barren and, as mentioned before, essentially void of any psychoactive attributes; additionally, marijuana has a distinct and potent aroma, while hemp’s odor is drastically more subdued.

Ironically, one of the only communities with legitimate cause for concern over the legalization and production of industrial hemp is the medical and recreational marijuana industry: due to their close biological relation, hemp crops have reportedly caused seeding in and thus ruined marijuana crops located up to 100 miles away. However, the current cannabis industry has not expressed any woes over hemp legalization, though we should expect strict zoning regulations for growing hemp and marijuana in the same region.

The Farm Bill also included many other bipartisan provisions that covered topics ranging from food aid to budget cuts, and it is estimated to authorize $956 billion in direct spending over the next 10 years.