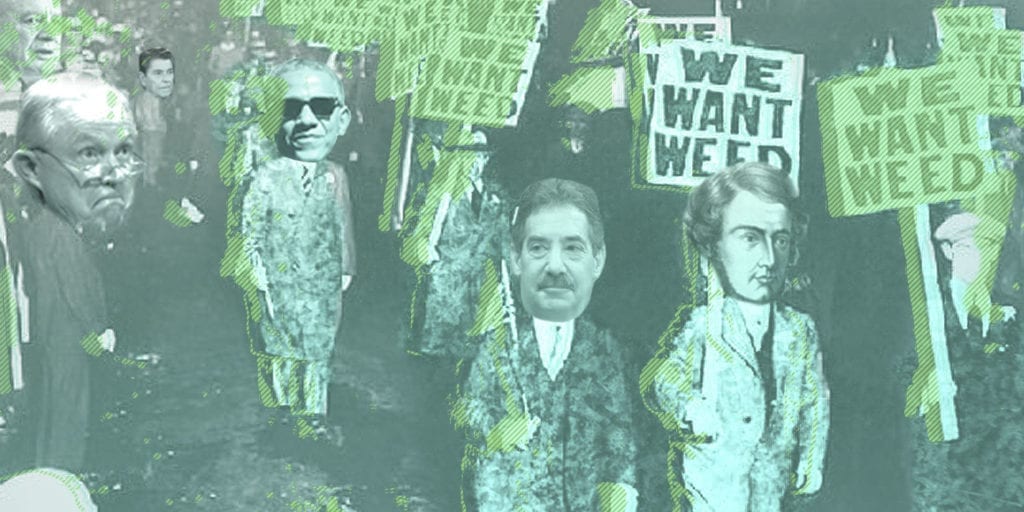 Cannabis has a complicated history in the United States but why was marijuana made illegal? Public interest in cannabis has gone through several cycles of boom and bust since its introduction to the West in the 19th century. Legislation for much of U.S. History has attempted to stifle consumption, though in recent decades the trend has seen some reversal.

Cannabis indica was first introduced to western medicine by William O’Shaughnessy in 1839. O’Shaughnessy had spent many years in India in pursuit of scientific discoveries. He returned to London in 1841 and spread his discovery to all of England. Medicinal cannabis had spread to pharmacies in the U.S. by the 1850s.

Cannabis use was on the rise in the U.S. in the middle to late 19th century. An 1854 New York Times article listed hemp among other “fashionable narcotics” including tobacco and opium. There was widespread use by the 1880s in “hashish parlors” found in every major city on the east coast. New York alone was estimated to have over 500 such parlors.

Efforts to regulate cannabis and many other pharmaceutical drugs began in this era in an attempt to block adulterated drugs from the market. Many states required drugs, when not issued by a pharmacy, to be labeled as poison. By the turn of the 20th century, most states had such poison laws in place, though some states explicitly did not include cannabis in their poison laws. There were attempts in California to regulate cannabis as early as 1880, made under the guise of controlling poisons.

The first major piece of legislation that began the 20th century’s march towards cannabis prohibition was the Pure Food and Drug Act passed in 1906, which required the labeling of many drugs. Previously, patent medicines were largely unregulated. Many contained “secret” or undisclosed ingredients, or misleading labels. A second wave of legislation rolled out in 1910 to quell continued complaints about the ease of acquiring narcotics.

State-level regulations limiting sale passed in Massachusetts in 1911 and in New York and Maine in 1914. Cannabis was required to be labeled and could only be distributed by pharmacists. This state-level regulation continued in the west with California’s Poison Act of 1913, followed by many other states over the next 15 years: Wyoming in 1915; Texas in 1919; Iowa, Nevada, Oregon, Washington, and Arkansas in 1923; Nebraska and Louisiana in 1927; and Colorado in 1929.

In 1938, the Pure Food and Drug Act was updated to the “Federal Pure Food, Drug, and Cosmetics Act,” which remains in effect to this day. It is one of the oldest operational pieces of legislation and creates the messy tangle of laws. Under the 1938 Act, cannabis is explicitly defined as a “dangerous drug.”

To this point, many of the regulations and controls on cannabis distribution were based on fines and economic penalties. The Uniform State Narcotic Drug Act of 1925 – 1932 was one of the first pieces of legislation that explicitly gave police the power to enforce drug laws, as well as standardizing many aspects of cannabis prohibition.

The FBN lobbied extensively for the passage of the Marihuana Tax Act of 1937, which made possession or transfer of cannabis illegal in the entire U.S., excluding industrial or medical uses. Enforcement was largely based around a tax system, as the federal government lacked the authority under the 10th amendment to regulate medicines and had to do so with taxes instead.

After the Marihuana Tax Act passed, Anslinger continued his campaigns for prohibition. Anslinger also ran campaigns with William Hearst, whose empire of newspapers used yellow journalism to create a belief that cannabis caused violent behavior, among other negative effects.

By the 1950s, cannabis had been successfully demonized. The Boggs Act of 1952 and the Narcotics Control Act of 1956 instituted increased and mandatory sentencing. The new laws required first-time possession offenders to be given a minimum of two to ten years and a fine of up to $20,000.

In 1969, Leary v. United States determined the Marihuana Tax Act was a violation of the 5th Amendment. Cannabis prohibition was very much still in the cards, however. As a response to the nullification of the previous law, lawmakers passed the Controlled Substances Act in 1970. The CSA was a part of the Comprehensive Drug Abuse Prevention and Control Act, which repealed the Marihuana Tax Act. The new law prohibited any use of cannabis, including medical. Cannabis was given a Schedule I classification, putting it on the same tier as drugs such as heroin.

From 1968 to 1973 the drug enforcement agencies of the U.S. government began to reorganize and on July 1st, 1973, the Drug Enforcement Administration was formed. With increased police power came increased incarceration. In 1975, the Supreme court ruled it “not cruel or unusual” for the state of Ohio to sentence an individual to 20 years for having or selling cannabis, effectively ratifying the plant’s Schedule I classification.

Prohibition began to ease in some areas at this time, however. The late 1960s saw a popular culture that was more permissive of cannabis use. California, one of the very first regulators of cannabis at the turn of the 20th century, was also one of the first states to soften the federal laws criminalizing cannabis. California introduced a law repealing certain prohibitions in 1976.

Through the 1980s, the Reagan administration created several new mandatory sentencing laws, including long prison terms for large-scale cannabis distribution. Three-strikes laws for multiple offenders went into effect at this time, which increased mandatory sentences as well as allowed the death penalty for certain “drug kingpins.” These laws were intended to curb cocaine and heroin trafficking primarily but were eagerly applied to cannabis as well.

By the late 1990s, the battle between state and federal drug laws had begun. California voters approved Proposition 215 allowing for medical cannabis use, followed by several other medical marijuana ballot initiatives in Washington, Oregon, Alaska, Nevada and Washington D.C. Federal legislators attempted to fight back with new legislation and the battle raged for some time, including in the Supreme Court.

The battle continued through the Clinton administration and continues today. Many overlapping laws and legal precedents continue to muddy the field. Recreational and medical laws at the state level have been vindicated on the federal level, while at other times declared invalid.

One of the biggest signs of support was the Obama administration’s “Cole Memorandum” which discouraged federal employees from prosecuting state-level Cannabis enterprises. The Cole Memo was later repealed by the Trump administration’s Attorney General, Jeff Sessions, continuing the pattern of mixed signals over cannabis legalization.

Despite setbacks that seem to follow every positive decision, the pattern of legal and legislative battles against prohibition seems to be favoring legalization. Cannabis continues to see increased public support as more research reveals a large range of medical benefits. A majority of states now have legal medical cannabis and many have recently legalized recreational cannabis.

Patrick Beggan is a writer and photographer based in Bellingham, Washington. After serving as a US Army medic, he developed a passion for natural and herbal medicine that led him to the West coast. As a photographer, he strives to capture mood & narrative simultaneously to create images that speak volumes.