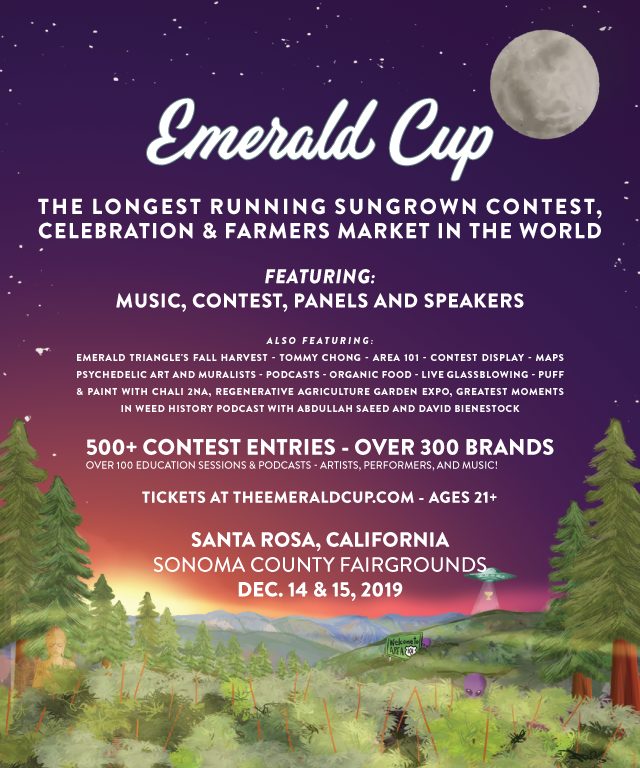 The Emerald Cup returns December 14 & 15, 2019 for the 16th annual competition and festival, bringing top cannabis experts, educators and farmers together with consumers. The event is the largest, most-respected organic outdoor cannabis competition in the world and will be held at the Sonoma County Fairgrounds in Santa Rosa, CA. Named for the Emerald Triangle growing region of Northern California’s Mendocino, Humboldt and Trinity counties, the Cup celebrates Emerald Triangle’s harvest and will feature over 500 contest entries this year. The weekend will also feature performances from just-announced Saturday headliner Flatbush Zombies as well as Santigold, Steel Pulse, Emancipator, The Polish Ambassador, Expendables, the Redwood Stage presented by Northern Nights Music Festival with DJ Crazy, Cofresi and much more (previously announced performer DJ Snoopadelic will no longer be performing due to a scheduling conflict).

For the first time, Emerald Cup will also have an app available for both iOS and Android users. With such vast and diverse reprogramming, attendees are encouraged to download the app for real time updates throughout the weekend and to better enhance their festival experience. The app, full weekend schedule and tickets for 21+ patrons are available now at https://theemeraldcup.com.

To encourage community service in the Emerald Cup family, the event producers have announced multiple service-related endeavors in partnership with Santa Rosa. Prior to the event, the Emerald Cup team will be helping nurture the health of the Martin Luther King Jr. Park by planting and re-staking trees for the public to enjoy for years to come. The Emerald Cup will also host a food drive benefiting the Redwood Empire Food Bank (https://refb.org). While patrons can bring individual items for donation, Redwood Empire Food Bank would prefer bags of “full meal” donations that would include ingredients for a full meal such as pasta, pasta sauce, along with fruits and veggies. “In acknowledgement of the recent and ongoing trials our community is facing, from the fires and power outages to the continuing changes and challenges with industry regulations, we have decided to direct our energies toward service to our community,” notes Emerald Cup founder and producer Tim Blake.

The Emerald Cup has also developed into the destination for agricultural experts, industry innovators, health and wellness advocates, cultural enthusiasts and the canna-curious to celebrate and expand their horizons. The Marketplace allows attendees to taste the terroir of California, featuring vendors including 20 seed companies bringing exclusive releases to the event and sungrown cannabis vendors from throughout the state. The weekend will see 300 brands including sponsors Cookies, The Botanist, Flow Kana, Elyon, Connected Cannabis, Alien Labs, Hempire and SC Labs; over 100 educational sessions & podcast recordings (more info HERE) featuring over 160 speakers including NBA Star and cannabis advocate  Matt Barnes, Peter Tosh’s Estate executor and daughter Niambe McIntosh, cannabis entrepreneur and The Notorious B.I.G.’s son C.J. Wallace, Dr. Bronner CEO David Bronner, Wine Enthusiast Magazine’s Virginie Boone, California Department of Fish and Wildlife’s Ryan Mathis, and NORML’s Justin Strekal; and much more. HeadCount’s Cannabis Voter Project will also be with us this year, making some noise and registering voters at their booth where people can pick up a FREE Cannabis Voter pin.

For the full Emerald Cup schedule and more, visit: https://theemeraldcup.com.