If we as a country dealt with the realities of racial capitalization, we would have a legal cannabis industry thriving as a free equitable market that prioritizes true craftsmanship and restorative justice. Instead we are pushing along state by state, choking for progress under the guise of social equity. As the country pushes forward, Massachusetts finds itself falling stagnant with liberal attitudes cloaking the truthful inequities of racial capitalization. Instead of moving forward with innovation, Massachusetts developed the legal cannabis industry to mimic other (broken) industries. These industries are reeling with the disasters of capitalism today. It’s apparent when you listen closely that Massachusetts is tone deaf in comparison to what the people who have suffered from the war on drugs are saying. What leads a state that prides itself on liberalism and innovation to fall so short in comparison to other states that have legalized and addressed the need to prioritize social equity in the cannabis industry?

Legalization Was Made Possible by the Traditional Market

Across the state of Massachusetts, countless horror stories about the crushing debt of waiting for your license application to be processed by the Cannabis Control Commission can be heard. “LET THEM FEEL WHAT WE FEEL” Leah Daniels cried in dismay after waiting over 610 days for her application to be processed. After CCC Chairman Steve Hoffman attempted to turn a room filled with a majority of white cisgender men against a black woman in a plea of support for racial capitalism, the CCC has still failed to issue a public apology to Leah Daniels for its failed leadership in dealing with its own failures and miscommunication, even after the public outcry and headlines by local journalists. It’s apparent there is an extreme disconnect between the people and the legislators/regulators shaping our cannabis industry across the country, but this is especially true in Massachusetts. We must bridge this miscommunication TODAY.

How to Build an Equitable Industry

Only today is Massachusetts starting to have a serious conversation in regards to creating a social equity fund with bill s.2650 sitting before the Senate Ways and Means Committee pushing for traction to pass before the end of the July. Tragically, Massachusetts is still processing that it has already borrowed from the traditional market and chose to invest in the prison industrial complex, along with the rest of the country. The people who founded this industry have already paid the state of Massachusetts – with their lives. It’s time for Massachusetts to SHIFT and join the rest of the country by prioritizing social equity in the quest for a free equitable market.

Shifting requires acknowledging that debt is not equity. A loan is being dressed up and called social equity in Massachusetts through support of bill s.2650. Never is there an acknowledgement from the Cannabis Control Commission that loans are a form of borrowing that create debt, nor that the financial shortfalls of 10% set aside for social equity funds when it takes millions of dollars just to open one dispensary. It is alarming how basic banking practices are being spouted as progression and slapped with the social equity stamp for approval. How can you borrow from something you created and own? This is the insanity the legal industry in Massachusetts is proposing to the traditional market today. Instead of building debt Massachusetts needs to build bridges. There is no free equitable market without acknowledgement of the failures of racial capitalism.

Yet Massachusetts supports loans. Loans are debt. Massachusetts should be proposing grants but apparently grants are too radical for such a liberal state. “This bill would give the support needed to these entrepreneurs, in the form of loans. In addition, I support the amendments included in Sen. Collins recent Amendment 179 to S2842 that expanded the bill to include loan forgiveness and grants, as well as a stipulation that municipalities grant host agreements to one equity business alternating with one general applicant.” Senator Patricia Jehlen.

This amendment was struck down by the Senate and Bill S.2650 still has not been amended to include anything from amendment 179 of Bill S.2842 as of today. It’s been noticed that no cannabis non-profit nor Senator has made public statements to push support of amending s.2650 to include grants other than Massachusetts Recreational Consumer Council and Senator Jehlen. S.2650 should simply be amended to include a loan forgiveness program that SE/EE licensees automatically qualify for. Or even simpler: join the rest of the nation and offer grants. Either way, Massachusetts legislators and the Cannabis Control Commission need to SHIFT today.

The horror stories of securing your Host Community Agreements licenses with municipalities is never-ending. Bill s.2650 needs to address lack of protective language if it wants the funds to get out and not sit unused and poorly dispersed. In an interview with Enterprise news, entrepreneur and social equity applicant Vanessa Jean Baptiste stated “We don’t have many resources. As an economic empowerment applicant and criminal justice major, I want to help people affected by the war on drugs. It’s really not fair that people with connections can get licensed, and people without government connections have to deal with the black market, knowing that they can get arrested at any point in time.”

Including a 1:1 priority between General and SE/EE licenses on a state level would be one way to address the problem, as currently licenses are being dealt with on a municipal level and often utilize a pay-to-play system which further marginalizes our SE/EE applicants. There are federal investigations occurring in municipalities across the state of Massachusetts because of this issue. Ignoring its existence doesn’t achieve anything and only widens the systemic damage from the inequities of prohibition. The people have been championing for a 1:1 ratio for YEARS. End the corruption. Our legislators need to SHIFT today.

Illinois devotes 25% of cannabis taxes toward social equity. In Massachusetts, it’s noted that the bill the CCC supports proposes a mere 10% of cannabis tax revenue. Keep in mind: it takes millions in startup capital to open one dispensary. There are 70 social equity/economic empowerment applicants with their licenses yet only 3 are open, with lack of startup funds being the number one barrier. Since the legalization of cannabis, millions of dollars have gone to pay police for traffic details at cannabis dispensaries, deemed mandatory mainly due to reefer madness mentalities. Zero dollars from cannabis tax revenue have gone toward areas disproportionately impacted by the war on drugs. 10% will assist only a few and ignore the hundreds. Who said that the people who lost the lives of loved ones, their community, & years of their own to the war on drugs only need 10% to successfully gain entry into the legal cannabis industry? Fuck liberalism. The people whose backs this industry STILL sits upon want their coins. All of them. They are not an afterthought. Our legislators need to SHIFT and amend 100% of cannabis tax revenue to the social equity fund.

It shouldn’t be hard to get social equity passed in Massachusetts, but this is a state that literally wrote into the legalization of cannabis that cannabis tax revenue would fund municipal police trainings. Prohibitionist indoctrination has shaped the legalized cannabis industry in Massachusetts from the start, and the failings of racial capitalization have already caught up with it. It will repeat over and over until there is acknowledgement. We cannot move forward until the issues on the table are addressed.

The MRCC has proposed multiple amendments to the current bill that would work to address the institutional trauma of the drug war, create opportunities for impacted communities, and set Massachusetts up as an example for other states to follow.  Read about our objectives and learn more about our organization on our website, and if you believe that the people deserve an equitable industry, let the Massachusetts Senate Ways and Means committee know that you support our amendments by clicking here to call or send an email today. 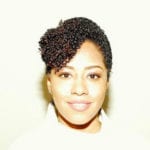 Saskia works as a bike mechanic at Broadway Bicycle in Cambridge, MA, currently the only black woman working at a cooperative bike shop in the entire state of Massachusetts. Saskia also works at Massachusetts Recreational Consumer Council, a consumer advocacy and education nonprofit that facilitates economic and social justice while functioning as a cooperative, as lobbyist and board member. Working as a lobbyist for social equity brings her into another rarity as she stands to be the only black woman working as a lobbyist fighting for social equity in the cannabis industry in Massachusetts. Saskia’s experience with practicing intersectionality and working in cooperatives brings an alternative outlook into the cannabis industry and the issues facing it today. If you’ve learnt something from Saskia and would like to support her directly: cashapp/venmo: sauce617. If you would like to support her work through Massachusetts Recreational Consumer Council, use the link above to put $5 on it and join the movement today.