The most prolific growers learned their craft out of necessity. Many cultivators are inspired to learn more about cannabis cultivation when they suffer a personal injury and use the plant as medicine. This is how Green Life Productions (GLP), a closed loop cultivation based in Pahrump, Nevada, first got off the ground. Owner and operator Steve Cantwell hasn’t always been a cannabis cultivator. Before this career, he trained in mixed martial arts under One Kick Nick. After injuries forced him to retire from the UFC, Steve began searching for alternatives to opioids for treating chronic pain. Through this experience, the former UFC fighter first found medical cannabis and, soon after retiring, he got his medical marijuana license.

Before coming up with and founding GLP, Steve had big dreams of cultivating clean cannabis for patients. After dreaming up the entrepreneurial endeavor, he wanted to tell his anti-cannabis kickboxing trainer One Kick Nick about his plans. Although Nick didn’t have objections, he suggested that if the cannabis was being grown with chemicals and synthetics, then it was a drug. That idea clicked for Steve and, inspired, he built an indoor cannabis cultivation that most closely matched nature, using zero chemicals. Years later, Steve and GLP have perfected a no-till living organic soil system indoors while still meeting Nevada’s stringent safety regulations. They use no synthetic fertilizers, fungicides, or pesticides — just compost tea and the occasional fish emulsion or liquid kelp. The soil is rarely disturbed and is currently on its 23rd cycle! Their philosophy is to take the best of nature indoors while following the basic permaculture principles in a closed-loop system.

“Over the years, we’ve designed a highly efficient facility — both from the LED lights to the amount of yield that we pull out,” Cantwell said. “It’s pretty minimal and pretty maximum at the same time.” 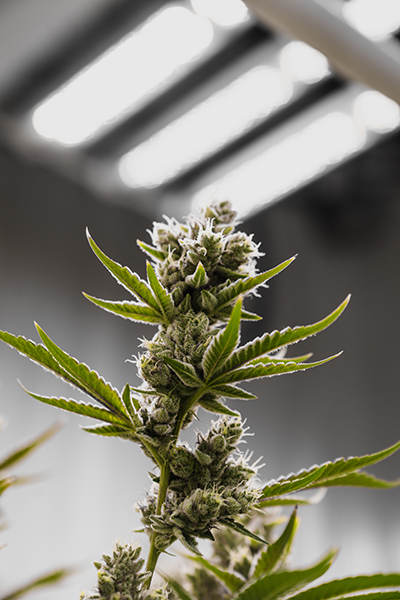 The soil is rarely bothered, and the majority of the water fed to the plants is reclaimed from their operation. Currently, GLP uses 60-70% reclaimed water with a catchment that treats water with filtration and UV sterilization before being recirculated. After they finish their current goal of closing the systems, they will be running on 95% reclaimed water. Using this system, the team is aware of everything both going into and coming out of the plants. To ensure that the soil and water maintain appropriate levels and are not contaminated, they run soil tests every 8-10 months to check out top trends and begin mapping out their next year. Instead of making huge changes, their philosophy is to use slow, small solutions to modify and adapt to what the plants need.

Green Life Productions has used LED lighting, raised beds, and no-till soil since its founding in 2015, but finding the best lighting system took some time. Their original system produced a decent yield, but their intense purple hue was hard to work under for long periods. When the lights started to hit their shelf life, GLP gave the green light to test new LEDs. Steve put three different LED lights to the test, growing the same strains under each setup, but none of the systems could outperform his old, heavily used LEDs. It appeared that each company had hoped to lower the sticker price, which sacrificed their engineering quality.

Steve shared his LED trials on Linkedin, and that is how they were found by Fohse — someone from the company reached out to Steve and set him up with three of their F1V models, which not only beat the other LEDs but he set personal yield records on the first run. With that success, they began testing the F1V against the company’s flagship A3i LED grow lights and again broke records with their yield, so they installed Fohse A3is in every room right down to veg. Regular harvests got so large that the dry room was over capacity, and GLP had to build a second room for drying their flower.

“Their A3i is second to the sun, you’re not going to find a better light source. With living soil, I’m reliant on the plant’s ability to cycle nutrients. I can only use [the A3i] at 60-70% intensity, which for me is a good thing because the lights will last longer, but man, if you’re running a synthetic system and can turn the light all the way, I can’t imagine the possibilities,” said Cantwell.

Yield is just a small part of why Steve evangelizes Fohse lights. Their plants have no side effects like bleaching and continue to test high in cannabinoid content. The A3i fixtures also allow Steve to influence the morphology of the plants; he can change the light spectrum to alter yield and flavor, but they can also help him to adapt the plants’ growing process to his space. Steve will run the Spring spectrum first to grow shorter plants with less internodal spacing and then ramp up to the Autumn spectrum at the end of their cycle. His lights are only 12 feet above his trays, so these parameters allow him to maximize flower while refraining from growing plants that hit the lights. He also takes advantage of the sunset and sunrise features, waking up the plants with as close to a natural sunrise as possible.

With the support of the Fohse team and his in-depth knowledge of the permaculture principles, Green Life Productions continues to grow. Taking permaculture into account influences their cultivation to make decisions that are best for the plants and serves as a framework for future problem-solving.